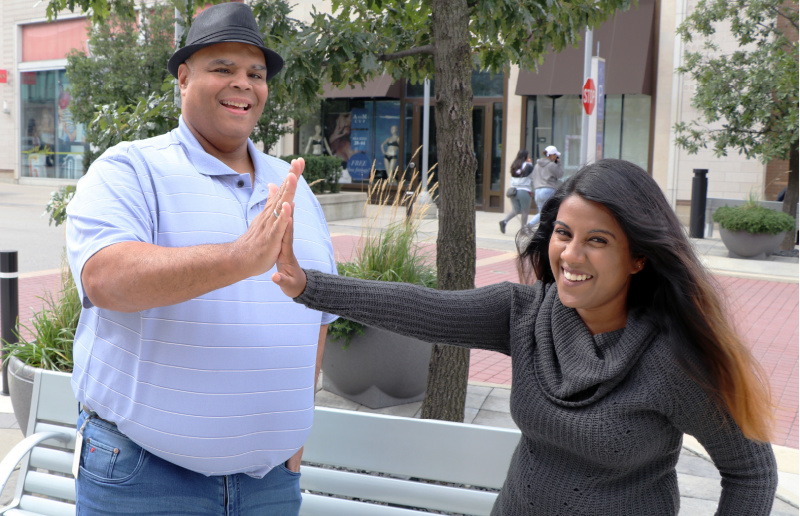 AMI-audio's Kelly and Company reached a broadcast milestone recently, logging its 900th episode. It is an incredible achievement, and the team shows no signs of slowing down.

Launching on Halloween in 2016, Kelly and Company has been anything but scary. Each day, co-hosts Kelly MacDonald and Ramya Amuthan—supported by a team of Community Reporters, producer Jeff Ryman and audio technician Matt Agnew—entertain members of the blind and partially sighted community in Canada, and around the world. With interviews and discussions about the arts, entertainment and lifestyle issues, it's a formula that has been in place since Day 1.

"The only thing that has changed has been the opening segment," Kelly MacDonald says. "When we launched the show, we used to spend the first nine minutes with an interview. We realized pretty quickly that, instead, we should devote that first segment to setting up the show, having a discussion, making a joke, setting the stage for the day." Chemistry is essential to the success of a program and Kelly and Company boasts plenty of that in on-air interplay. It all starts with Kelly and Ramya and continues with its contributors.

“While the chemistry between Kelly and Ramya is a major reason why listeners have connected with the program, the whole company of contributors is what makes the show so impactful," says Andy Frank, Manager of AMI-audio. "It’s the perfect blend of content and charm.”

When you tune in to Kelly and Company, you hear honest, insightful conversations on a plethora of subjects, from finance to health, pets to law, and entertainment to the latest local news and events from across the country. And while much of Kelly and Company is light-hearted, they're not afraid to tackle hot button issues in thought-provoking discussions on Black Lives Matter or the annual "Back to Basics" week of programming, where those new to the blind and partially sighted community can turn to learn about the support systems and technology offered to them.

"Kelly and Company wouldn’t be where it is today without everyone who’s involved with it," says Jeff Ryman. "Kelly and Ramya are passionate about advocating for people with disabilities and they create content that is informative and entertaining."

Ramya began her career at AMI as an intern, and sat in the control room, helping to produce the show. Impressed by what she heard between Kelly and Sharon Caddy, Ramya jumped at the chance to co-host when Sharon left.

“I kind of suggested that I would like to be the co-host,” Ramya says with a laugh. “I really liked the show and the personalities on it.”

“The chemistry was instantaneous,” Matt Agnew confirms. “With Kelly first broadcasting out of London, Ont., and then all of us scattered to the wind most recently, it’s been important to keep that chemistry intact. A lot of that is done off-air, talking strategy for whatever is coming up or, mostly, just goofing around.”

We asked Kelly, Ramya, Matt, Jeff and Andy to give their favourite or most memorable moments over the last 900 episodes.

“Doing remotes. Wishing each other good luck before the show starts. I never get tired of that.” — Kelly MacDonald

“The first time that I did a long read, for This Day in History, I was so nervous. I still remember how my stomach felt.” — Ramya Amuthan

“We love doing remote broadcasts as a team. One that stands out for me was the Folk Music Ontario conferences. As an audio technician, getting to work, live, with these world-class musicians is just so much fun.” — Matt Agnew

“One of the most memorable moments for me on the show include going to the gun range. It was a little nerve-wracking when you hold a gun in the first place, let alone do it with two of your colleagues, who are blind!” — Jeff Ryman

“My favourite shows have been the holiday parties they’ve enjoyed in the AMI kitchen! Observing the camaraderie within the Company is another reason why the show succeeds, they are Kelly’s biggest fans!” — Andy Frank

Tune in to Kelly and Company, weekdays at 2 p.m. Eastern on AMI-audio.

Stream all of our AMI-audio programming.

The full AMI-audio schedule is available online. To find the AMI-audio channel with your cable provider please use our online channel guide.