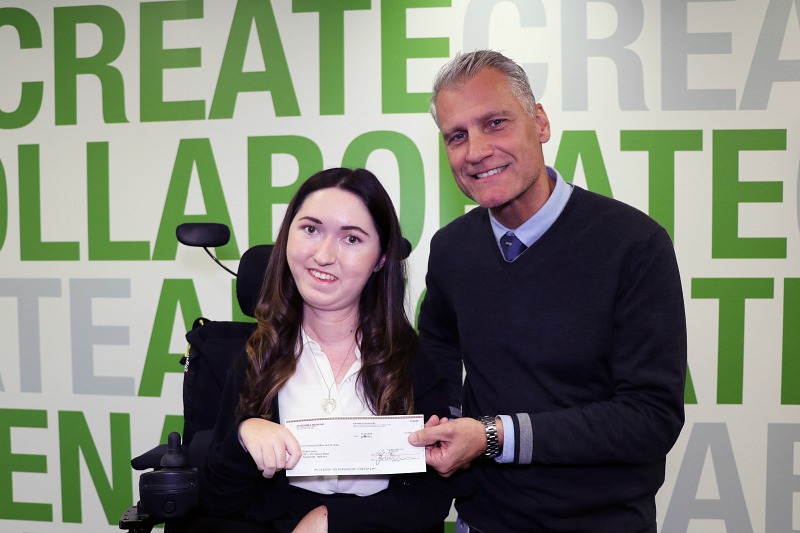 Established in 2012, the AMI Scholarship Program was created to celebrate AMI’s commitment to making accessible media for all Canadians. In 2016, the program was renamed the AMI Robert Pearson Memorial Scholarship in honour of Robert Pearson, AMI's first Accessibility Officer.

The scholarship program is open to Canadian citizens or permanent residents of Canada with a permanent disability who are currently registered in and returning to a full-time program of study at an accredited Canadian post-secondary college or university. In 2019, AMI will award two $5,000 bursaries to two deserving students with a permanent disability; one from the English community and one from the French.

The recipients of the 2019 AMI Robert Pearson Memorial Scholarship are Victoria Lacey (above, with AMI President and CEO David Errington) of Toronto, ON, and Léonie Côté from Quebec City. Victoria is in Year 5 of a Masters program in Creative Industries at Ryerson University while Léonie is completing her graduate studies in Clinical Kinesiology at Laval University in Quebec City.

Check back here in February for details on the 2020 application process.

2016
Sean Heaslip of Vancouver, BC
Valérie Poisson of Montreal, QC

2015
Jack McCormick of Tillsonburg, ON
Louisane LeBlanc of Montreal, QC

​2014
Courtney Knight of Burnaby, BC
Judith Oluwatosin Jubril of Brampton, ON

2013
Gillian Murch of Orillia, ON
RuiLin Guo of Barrie, ON

2012
Charmaine Co of Richmond, BC
Jan Boomhouwer of L’Amable, ON