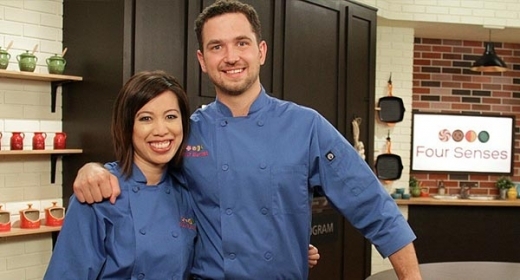 Celebrity chefs Christine Ha and Carl Heinrich team up with special guests for an exciting cooking show with an accessibility twist.

Celebrity chefs Christine Ha and Carl Heinrich team up with special guests for an exciting cooking show with an accessibility twist.

Christine Ha
Although she has never formally studied cooking, Christine was the first-ever blind contestant and subsequent winner of MasterChef in 2012. She has a large following on her food blog, www.theblindcook.com, and has written a New York Times bestselling cookbook entitled Recipes from My Home Kitchen: Asian and American Comfort Food. In 2002, Christine was diagnosed with a rare autoimmune condition called neuromyelitis optica, which caused her vision loss. Follow Christine on Twitter: ​@theblindcook

Carl Heinrich
Carl trained at the prestigious Stratford Chef School. After graduating, he moved to New York City and worked for Daniel Boulud for four years. Motivated by a desire to move back to Canada to be closer to family, Carl accepted a position at db Bistro Moderne in Vancouver. In 2012, Carl won Season 2 of Top Chef Canada and has since opened an acclaimed restaurant, Richmond Station, located in downtown Toronto. Follow Carl on Twitter: @ChefHeinrich

on the AMI app