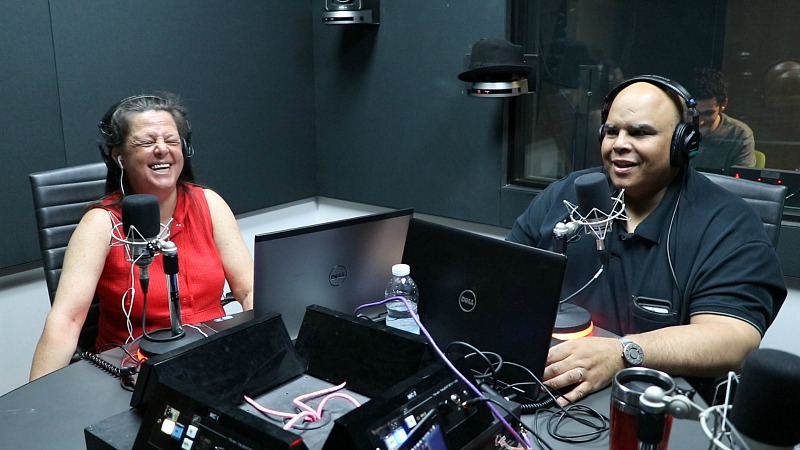 Milena Khazanavicius' first experience with Accessible Media Inc. was having grocery flyers read to her. Now, she's taking to the airwaves herself as a Community Reporter for AMI-audio's Live from Studio 5.

The Halifax-based Milena, and her guide dog Louis, recently flew to AMI's Toronto headquarters to meet the staff, tour the office and appear live in-studio on both Live from Studio 5 and Kelly and Company. A Community Reporter for just over two years (and a co-hosting gig on AMI-tv's Growing Sense), Milena combs Nova Scotia, looking for experiences blind and partially sighted Canadians can be a part of.

"AMI opens up our whole world," Milena says, sitting in AMI's kitchen with Louis curled up at her feet. "Before I discovered VoicePrint was available and I could have my grocery flyer read to me, I would have to count on a volunteer or maybe my neighbour or my parents. Having the information coming in from all across the country, it's eye-opening, it's educational. You listen to people's stories on AMI and you say, 'Hey, I can do that too.'"

Milena, an avid volunteer for CNIB and Frontier College—where she tutors young learners in literacy, many of them new Canadians—admits she felt a little out of her depth when she first sat down in the studio but quickly adapted.

"I'm smiling from ear to ear because it's been great," she says. "I had anxiety about how I'd handle co-hosting the two shows because I'm not that tech-savvy. Everyone has been more than helpful and attentive. It was like getting on a roller coaster, holding on and going for the ride."

Milena's relationship with Louis has been a roller coaster as well. He is her third guide dog and, at first, he was anything but helpful.

"Louis wanted nothing to do with me," she says with a laugh. "My instructor also trained him. Being a German Shepherd, he is loyal to whoever they are with and he had been with my instructor for about five months. He literally whined, screamed and yelled for the two weeks we were trained together. And then he said, 'I guess I'm stuck with you.'"